Facebook Twitter Linkedin Instagram
Bioenergy healing
Bioenergy healing is one of the most effective energy healing methods of our day. Everything about us (mind/body/spirit) is connected in this energy field that expands as far as we can reach, forming a sort of a shield around us. If there are areas of imbalance in the field (too much or too little energy) or obstacles in the energy flow, the negative results will reflect on any or all aspects of your life. Too much energy may result in pain; too little in other medical conditions…

With bioenergy healing, we balance the field by taking off or adding energy, as well as jumpstarting the energy flow. Once the energy is back in balance, the body (mind/spirit as well) is able to continue its natural function, including healing itself. It is the most natural and most effective way to heal!
Download E-Book
WHAT IS BIOENERGY? 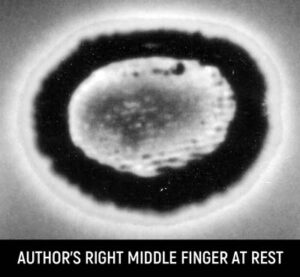 If you look at the human body, it appears to be solid – flexible yes, but still solid. Yet, we know that roughly 70 percent of the body is water (with variations, depending on one’s age). Can you hear that water splashing around? Of course not, because it is contained in trillions of tiny little balloons called cells. Let’s magnify an individual cell—or better yet: an individual drop of water. We will find that it is made of molecules. These also resemble balloons, and are filled with gases: hydrogen and oxygen. Now, if we could go deeper into them, at higher magnification, we would find atoms—the tiniest particles that make up the entire universe.
Let’s review the atom – in case you skipped your quantum physics class. When you think of atomic structure, you may compare it to the solar system: in the middle of the atom, you have the nucleus (like the sun in the middle of the solar system). Surrounded by electrons (like the planets around the sun) travelling at a certain distance from the middle, never drifting away or collapsing into the center. The real key to understanding energy is the actual distance between the nucleus (or the sun) and the electrons (or planets). For a moment, don’t think of the model of the solar system sitting on the teacher’s desk that you remember from school. That was only a visual aid that has nothing to do with accuracy. The real model would be impossible to contain in any school facility. The actual distances are just mindboggling: If we could shrink the sun to the size of a pea, Pluto (sorry, Pluto, for losing your planet status, but it is the last rock in our solar system) would be a mile and a half away, and it would be the size of a bacteria! Yet, they still stay together in their predetermined path, held together by this invisible force we call gravity. 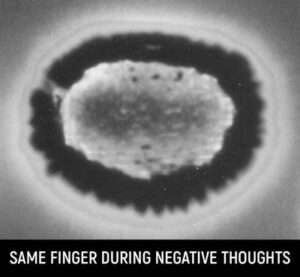 The actual atomic structure is even more unbelievable. If we could magnify the nucleus (which is positively charged) to be the size of a pin head and put it in the middle of a stadium, the closest electron (which is negatively charged) would be outside the bleachers! Moreover, the weight of the entire stadium (or atom in this case) would be contained in that single nucleus! Now imagine the tiny electron as only a speck of dust (if even that) travelling around the stadium at such break-neck speed, that you would never be able to actually point it out. It would cover any spot in the stadium at any given moment, giving it the appearance of a full ball. Yes, to an outsider, the atom would appear to be a ball. However, we do know that it is not. Most of that atom is just the energy holding things together. 99.9999999999 percent (give or take a few nines) of the atom is just empty space, like the universe itself. As in the universe, there are some distant “stars” in the atom as well, called quarks, as well as other tiny “particles,” but they are not important for our visualization.
Now, if you take one of these near empty stadiums and find another nearly empty stadium and then another mega zillion of these, you will end up with a human body. We do appear solid, but we know that deep down we are made of mostly nothing. 99.9999999999 percent of empty space to be more accurate. We are primarily pure energy.

We also know that our bodies are electromagnetic in nature. Our nerves transfer electromagnetic signals all day long. Our heartbeat is regulated by electric current. Not to mention our electromagnetic brain activity. As a matter of fact, we can measure everything in our bodies that we can measure in a radio or TV set: we have amps, ohms, volts, etc.
As with the power lines which are surrounded by an electromagnetic field as long as there is current, our bodies are surrounded by a certain electromagnetic field as well. In the power lines, the field can be measured, and it can be mathematically accounted for. The human body is a bit more delicate and complex than that. It would be quite difficult to get an accurate reading, and quantifying would be nearly impossible. There are ways to photograph the field around us, but those are still not precise enough. Kirlian photography has been around since the 1930s with mixed results. It is possible to take aura pictures of your hand or a leaf or various other objects or body parts. However, it can’t give a precise measurement of the energy field. There are Kirlian machines that will depict what your aura around your head may look like in real time, but those, again, are just electromagnetic connections read off your hand (through a conductive plate) subsequently transformed in a computer to a picture around your head. They are great for new age expos, but not good enough for modern medical diagnoses. 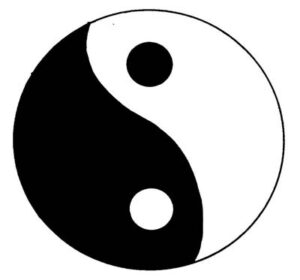 Contemporary medicine still has the best diagnostic methods. Unfortunately, it separates the mind from the body (or the electromagnetic from the physical) and doesn’t look at the human being as a whole. It is important to realize that, as with all things in the universe, our energy tries to stay in a certain balance. Just like the T’ai Chi symbol, a.k.a. the Yin and Yang. We learned that the human energy field itself is connected to every aspect of our being: mind, body, spirit, emotions, and whatnot. Balancing the energy will thus affect every part. Many times, I had clients for certain physical problems, and they reported improvements in their mental and emotional lives, too. Vice versa as well. It is a positive side effect.
According to Chinese philosophy, everything is made of opposites: male-female, hot-cold, mountain-valley, fire-water, etc. There is always a little bit of one in the other. However, one cannot overtake the other—that would mean the end of them both, or death.
In a similar way, our universe as well as our energy system, tries to stay in infinite balance. In the case of an inanimate object—for instance, a plastic chair (which mind you, is also made of energy)—this balance is everlasting until the moment we burn that chair or disintegrate it in another fashion. Our bodies are quite different. Our energy changes all the time, virtually every moment of our lives. It depends on many factors, such as nutrition, environment, the people around us, our thoughts, etc. It is practically impossible to keep it balanced for long periods of time, yet we don’t necessarily become ill every time it goes out of the equilibrium. The problems start when we have parts of the energy out of balance for longer periods of time. Most illnesses actually show up first in the energy field and only later in the body. As a general rule, the healthy aura is always smooth and even at approximately an arm’s length distance from the body. We may feel imbalances in parts of it even when the person feels perfectly healthy—that again is because the problems will show in the field before they show in the body. Thus, it is sometimes possible to predict a problem before it happens. Naturally, this doesn’t apply to injuries and violent acts with baseball bats, bullets and such. The ultimate goal is to stay as close to the balance as possible, at any given moment of our lives.
you should try BIOENERGY healing
IF YOU SUFFER FROM:

Phychokinesis is real, and quite fun to watch, as well as experience in person!